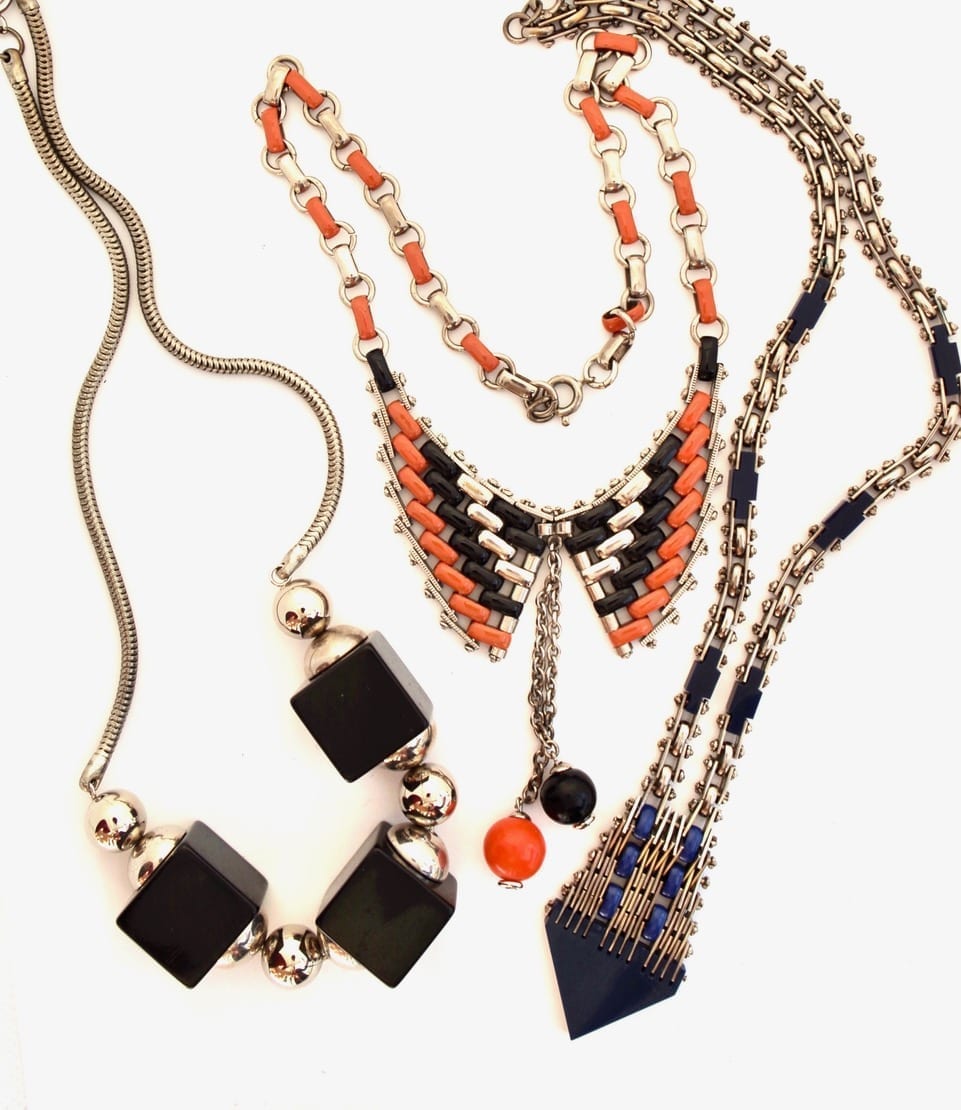 Jakob Bengel began making watch chains in his factory in Idar-Oberstein, Germany in 1873. The chains were made from silver, brass and other alloys known as Tombac and Double Americaine. The majority of Jakob Bengel Jewellery is unsigned/unmarked (the Bengel mark is a pyramid stack of cannon balls and a cannon) especially those that were exported. In some cases because of Germany’s lack of popularity in the 1930’s, items exported to France were marked ‘Made in France’

He was a success and in the 1920’s went on to producing geometric costume jewellery using chromed chain, tubes, findings and Galalith (this is a type of early plastic similar to Bakelite and Catalin).  He also created complicated constructed chain known as brickwork, this was cold painted in reds, blues, blacks and greens.

It was during the Bauhaus and Art Deco period that Jakob Bengel was looking to obtain new materials and inspiration to produce costume jewellery. Inspired by French Avant-Garde and other fashion trendsetters such as Coco Chanel, Jakob Bengel started to produce experimental jewellery. The pieces, catalogued 1924-1939, combined brass and chrome with geometric shapes of coloured galalith.

One of Idar-Oberstein’s most celebrated manufacturers was Jakob Bengel. His factory was taken over for war production in 1939 and his work was subsequently neglected, but it was realised that pattern books, tools and stocks of unsold pieces remained in some of the factory buildings, in the villa in which he once lived and in the houses that he built for his workpeople.

The factory closed on the outbreak of World War Two in 1939 and lay closed and undiscovered until 2001 when collectors discovered the factory and its catalogues.

The Jakob Bengel Jewellery factory is now a museum. Two reference books have been published featuring the original drawings and pieces. A trust was set up in 2001 to preserve and present the whole complex as an industrial monument where visitors are able to see examples of Jakob Bengel’s work, and displays illustrating the industrialisation of the jewellery industry.