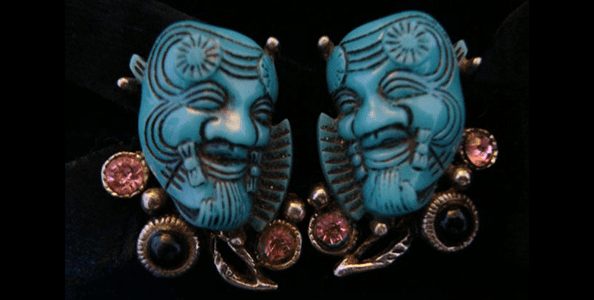 Selro/Selini Jewellery is best known for amazing figural, often depicting Asian and African faces, these unique pieces were designed by Selenger himself. It is interesting to note that even some of the plastic pieces themselves are stamped “Selro Corp ©”. Selenger must have had a copyright on some of the Asian faces that are so unique to his jewellery. There are basically three different figural faces that are found in Selro/Selini jewellery: An Asian woman face (Often called ‘Thai Girl’), an old Asian man face and an African face. These faces can be found in numerous colours and textures (i.e. pearlized), plus are often over painted and embellished with elaborate headdresses that are part of the metal settings.

Paul Selenger was born in Odessa, Russia in 1911. In 1927, he immigrated to the United States with his mother Rose and sister Fannie.
Selenger became a U.S. citizen in 1942 and served his new country as a Staff Sergeant in North Africa during World War II.

Early in his costume jewellery career, he worked for H. Pomerantz & Co. in New York. The company was in business from approximately the late 1940s until about 1975. Selenger married quite late in life at the age of 52 and never had any children. He died at the age of 79 on Dec. 16, 1990.

Designer and manufacturer Leo Geller manufactured some of Selro’s stock between 1960 and 1975. Geller also said that Selenger designed a line for Hattie Carnegie.

Much of Selro/Selini jewellery is unsigned and may have been originally hang-tagged. There are some clues, however, to identifying unmarked Selro/Selini jewelry. First, the heavy, herringbone chain that Selinger used on his lariat necklaces is distinctive and unique. A finer herringbone chain can often been seen on the smaller pieces. Secondly, many pieces have a unique bracing structure on the back of the jewellery that can also lead to its identification.

Finally, Selinger’s settings are extremely complex and detailed, Selinger liked to use very decorative prongs in his settings with large, glass cabochon stones or heavily carved plastic stones and dangles.

Often, figural jewellery from Selro is confused with that of the manufacturer Har. Many wonder if there was a connection between the two companies. Faytell said that Selenger had hundreds of pieces of Har in his personal collection. Geller, however, says there was no connection whatsoever between Har and Selro. Geller also manufactured jewellery for Har.

Selro merchandise was distributed through a New York wholesaler called Fran & Co., which placed jewellery from such manufacturers as, Art, JJ and American Chanel, in department stores such as Marshall Field’s, Wieboldt’s, and Goldblatt’s.

The original Fran and Co. price tags denoted the wholesale price to the individual department stores. Many in the costume jewellery industry remember Selenger as a “jobber” (or independent manufacturer’s representative) in the costume jewellery industry for a number of companies, including Florenza and Capri. In the 1970s, after he closed Selro, he served as this bridge between the factories and the wholesalers.

The Selro Company itself was always based in New York City. Selenger also manufactured jewellery under the name Selini and possibly, under the name Selan, but the main company was called Selro Corp. According to Faytell, the telephone at the company was answered “Selro”. For a time, Selro and Selini were produced simultaneously. Occasionally, jewellery can even be found featuring both the Selro and Selini marks.