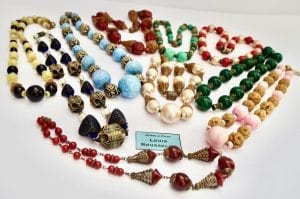 Louis Rousselet Jewellery developed through manufacturing glass and Galalith plain and carved beads as well as imitation pearls (glass beads coated on the outside with essence d’Orient, a fish scale compound). Louis Rousselet Jewellery became a major source of handmade beads worldwide. You can very often identify a ‘Rousselet bead in other designers jewellery once you get to know his beads.
Louis Rousselet (1892-1980) was born in Paris and apprenticed at the tender age of eight to M. Rousseau, to master the technique of lamp-work beads.
Denise Rousselet designed occasional collections for her father from 1943 until 1965, when she took over the exclusive design duties. In 1960 she opened a tiny shop named Jeanne Danjou (her mother’s name was Jeanne) on the ‘Ile de la Cite’ where she sold Rousselet beads separately. Rousselet beads were all hand worked and polished. There was a wide variety of colors and style of beads: foiled, iridescent, leaves, lamp worked multicoloured swirls, all produced in the same way for fifty years.
The majority of the jewellery had swing tags on them, I have come across screw earrings that have the initials LR on the back of the screw fitting or sometimes on a clasp.  The majority of the beaded necklaces were strung on a fine chain and the screw barrel shape clasps often have ‘Made in France’ on them.  There were a range of different shape barrel clasps that were used which helps in the identification of a Louis Rousselet necklace.
Because the beads were strung on chain in order to separate the beads he also used a variety of metal spacers which as a whole are unique to his jewellery.
I have collected Louis Rousselet jewellery for a number of years and therefore have a large stock please contact me for further information or stock enquiries.
← ROGER JEAN-PIERRE LISNER JEWELLERY →
This website uses cookies to improve your experience. We'll assume you're ok with this, but you can opt-out if you wish. Cookie settingsACCEPT Privacy Policy
Privacy & Cookies Policy