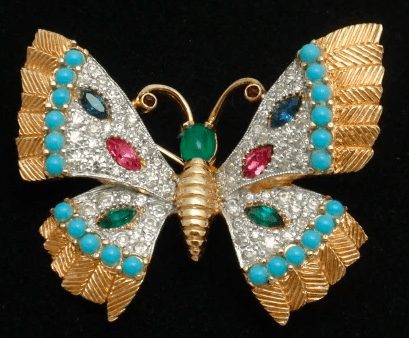 In 1946 Joseph left and formed Joseph J. Mazer Company. The trade mark was Jomaz. Some early pieces were created by Marcel Boucher. Louis left Mazer in 1951 but the company did not close until the late 1970s. Adolfo created some of these later pieces.

The seven original Mazer brothers moved to the US from Russia in the first decades of the 20th century. How many worked in the family business is unknown but the company was originally known as “Mazer Brothers” with the hallmark signature used usually being Mazer Bros. Eventually Joseph Mazer went on to open a separate company and the new logo Jomaz came into play.

Regardless of the mark, almost anything with the Mazer, Mazer Bros or Jomaz signature is a piece of beautiful design and quality. Prices on the secondary market usually range from average to high.